Go to download
You are using an out of date browser. It may not display this or other websites correctly.
You should upgrade or use an alternative browser.
Overview Tutorial to use file Reviews (9) History 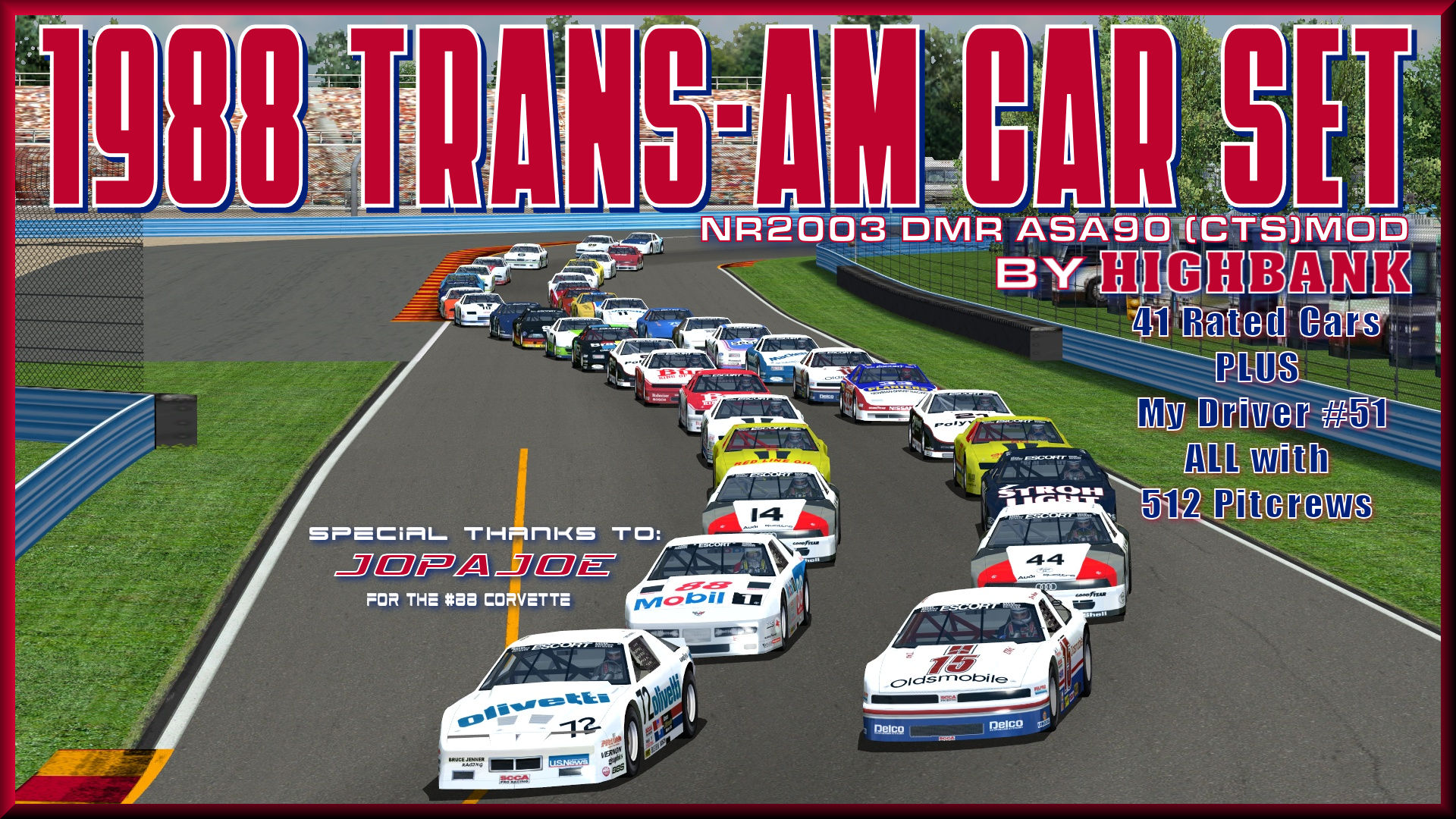 Special thanks to jopajoe for allowing me to include the #88 Daren Brassfield Corvette he had made for a Paint Request @ Stunod Racing. Seemed a shame to paint it again since he did such a fine job on it.

-Denis Rouix and the DMR Team for the wonderful ASA90 mod, without which my Trans-Am Series carsets would have stopped at 1970!

-BCR for the "BCR_Alpinestars_WarWagon2" template with which I did all the crews on.

-John Norton for his W.I.P. Riverside WKC tracks which gave me so much inspiration. Though the 1988 Trans-Am Series didn't stop at Riverside (should have-who knew) most of my testing work and fun were derived from running laps with the set on his Riverside versions while the set was in various stages of completion. I deeply appreciate the time and love he has put into these wonderful "Real Riversides". I can't wait for y'all to have them too! Also, his Riverside tracks have ensured that my Trans-Am sets in NR2003 won't end with this 1988 set, I simply must do ones for each year that the series DID run at Riverside (as far as they can go on the ASA90 mod)

-garrett1127 for his hours of company on Discord painting his stuff while I painted my stuff...makes these sets a whole lot less tedious.

The 1988 Trans-Am season was dominated by the two Audi Quatros. These cars had "All-Wheel Drive" making them very formidable. So much so that the SCCA slowly changed the rules until it neutered the make and Audi happily moved on to the IMSA Series, where they were also formidable but not at the level they were in Trans-Am. Another interesting thing about the Audis was that they were the only cars in the series that began life as actual factory road cars. Everything else on the track was a tube-frame purpose-built racing stock.

The #14 Audi Quatro was split between Hans Stuck and Walter Ruhrl, so I decided that instead of including two cars with the different names on them I'd just include the Hans Stuck version, the game would probably pick the same driver/car for any race you wanted to run, I decided it best to keep the size down and just have the one.

Which brings me to this:

I could have easily included another 20 or more cars, cars which I even have adequate images of, but again I decided in favor of keeping the set to 40 or so cars. I'm still doubting the wisdom of this choice, but it is what it is, and having lost this set twice to fates out of my control, capping it, and getting it shipped became a real focus of mine...I MAY, (heavy emphasis on MAY), come back to this with a small add on set, but frankly, there are still several very doable years I want to do and I am quite able to say 1988 is done. Cheers!

THANKS to all y'all who download my Trans-Am sets, it gives me more satisfaction than I can ever say to know that my efforts might bring anyone else some pleasure...


I've also added a download for the DMR Cup90 White-letter Goodyear tire MIPS for use with this car set...(to replace the Hoosiers)
DMR Cup90 Goodyears
Reactions: bassman58, Jebrown, DaleTona and 8 others

Just amazing! Hope to see more work from you in the future!

Highbank
Looking at 1983, 1984, 1989, and 1990 right trying to decide which to do next...Leaning toward 1983, for the cool DeAtley Camaros that David Hobbs and willy T Ribbs drove to great success, including a stop at Riverside. '84 was Trans-Am's last stop at Riverside, so that intrigues me. I like the Berettas in '89 an '90...
Upvote 0 Downvote
Fantastic work and well worth the effort and wait!

Highbank
Thanks Daven!
Upvote 0 Downvote
Unbelievable amount of labor of love work that went into this extraordinary car set that also included a history lesson with it. As always Bill You've knocked it out of the park. Thank You!

Highbank
Thanks Mark, Oh and thanks for singing that Eddie Rabbit song for me!
Upvote 0 Downvote
Egg sell ant

Highbank
Your Spellcheck is AWESOME!
Upvote 0 Downvote
I wish I could award 10 stars!!! It was simply amazing watching how fast you were able to put these schemes together... and not sacrifice the ultimate in quality, accuracy and details. It boggles my mind thinking about how much effort it must have been to track down reference materials and then make them come to life on our PCs. No doubt a true labor of love which I can greatly appreciate. Can't wait to run against these beauties! Thank you, Bill!

Highbank
5 years on this one, mainly because I lost two hard drives and the will to do it again...then once the fire was lit, i had to get through it as quick as i could for fear I'd lose interest in something I'd done twice before....tracks have come along way in the last few years too!
Upvote 0 Downvote
Fantastic work....can't wait to run these on Zoom....

Highbank
Ya, that'll be fun...
Upvote 0 Downvote
that must have taken a lot of work