It's official.. I'll have to miss this mornings race.. My buddy's got surgery coming up and this was the only day we could get out for some water therapy.. Please don't delay it on my account!! I will be back next week!! I've got my sights set on Buttonwillow#1.. All ya'll may want to schedule something on that day.. You know why!!! Uh huh!!!
Reactions: The Tigg and Highbank

So fellers, what do you think, do we go without him? HMMM?
Reactions: M_Nesevitch

Naw, with only 4 of us, we can wait.
Reactions: M_Nesevitch and The Tigg

At least Tigg and Tom have my back.. Thanks guys! I'll make it worth the wait!!
Reactions: Highbank and The Tigg

You said no race so I took the time to do other things...I'm really too busy most days to keep scheduling these things and then we not do them....Mick said run it
Reactions: The Tigg

That's what I figured. We all need a little time away to do other things.

Welp.. I broke 2 cardinal sim racing rules in the Laguna Seca race.. Not practicing was 1.. Then once I got the handle on the track and made my way through the AI I didn't feel out the humans and ran over Tom 1st chance I got.. Sorry Tom.. We had fun for a lap or two! Congrats Bill on a perfectly executed win!
Reactions: The Tigg and Highbank

Race 3 @ Laguna Seca Results
In an effort to get this thing back on schedule we ran our third race of the series this afternoon @ Laguna Seca.
Four of us lined up in the back (on purpose) with 15 ai cars.

The ai were turned up another click and they were feisty. AI drivers led the first 5 laps as the Human drivers worked their way thru them. Tom (garrett1127) and Bill (Highbank) caught the top 5 finally on lap 6 heading into T4. 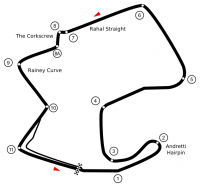 Tom went a little wide on T4 exit which allowed Bill to move into 2nd as he worked his way thru the leaders. By the Rahal Straight Bill had the lead with Tom in hot pursuit.

Meanwhile, Dan (Tigg) was struggling to get thru the ai traffic as was Mick, Mick was having a better go of it. Tigg confessed often and loudly that Seca was not his favorite track. Mick suffered from very little time on the 11 turn historic road course. (And a generous soul).

Tom and Bill would exchange the lead several times over the next few laps until Mick got into the action. After dispatching Bill, Tom and Mick set off at a blazing pace that left Bill in the their wake, but by the final turn, Turn 11 they got caught up in each other allowing Bill to squeeze thru and retake the lead. Tom claimed a total of 2 laps led of the 18 ran. It was a timed race with 30 minutes being the allotted time.

Tom would also claim the fastest lap turned during the curse of the event running a quick 1.38.179 at some point.

Bill would lead the rest of the way, keeping out of trouble while Tom and Mick had a couple solo spins and some ai involved incidents as well.

Tigg fought an admirable albeit a losing battle against both ai and track and was clearly relieved when the 30 minutes expired and the checkers fell on Bill. A Last-2-First run for the #51.

Mick worked his way all the way back up to grab a second place finish. Tom finished 4th behind Bill, Mick, and an ai car.

Tigg finished 19th and we won't talk about that again. Dan is looking forward to Buttonwillow next week as he has had a much better experience on the relatively flat roadie near Bakersfield.
Last edited: Apr 7, 2019
Reactions: The Tigg and M_Nesevitch

Highbank said:
By the Rahal Straight Bill had the lead with Tom in hot pursuit.
Click to expand...

Oh, now I see how it is.. You know the names of the corners and what not? I feel hustled now..
Reactions: The Tigg and Highbank

Tom Howell, with 2 wins continues to lead the points after 3 races. Bill Harrison chases in 2nd with large deficit to make up to challenge Tom's points lead.

Mick Nesevitch moves up from 4th to 3rd as Dan Kaisinge's woes at Laguna Seca take a huge bite out of his tally to date.

Two more races remain on the schedule: Buttonwillow and the finale at Thunderhill.
Reactions: M_Nesevitch

Ya I thought you had the hot lap but the data would say otherwise....
Reactions: M_Nesevitch

Tom may be unstoppable unless he really has a bad couple of races...but you just don't know

Laguna Seca and me get along as well as my sister and me, we haven't talked in 21 years, LOL!
Reactions: Highbank

You guys better watch out @The Button.....I like that jump and can pass a car while in the air....
Reactions: M_Nesevitch, The Tigg and Highbank

It must be allowed, you did it and the proof will be on YouTube in a few hours, LOL!
Reactions: Highbank and M_Nesevitch